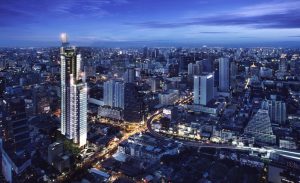 Bangkok (Thailand) – February 15, 2019 (travelindex.com) – Bangkok is becoming one of the world’s most well-connected mega-cities – a leading example of how infrastructure and innovation can transform people’s lives. The expansion of the city’s MRT subway and BTS skytrain networks, along with new Airport Rail Links and suburban SRT lines, is revolutionising urban transport and making Thailand’s capital city more accessible than ever before.

Book your hotel in Bangkok, Thailand and around the world in 95 countries at best rates available. Pay at the hotel and earn HolidayClicks Points. Book now at HotelWorlds.com!

Capitalising on these developments, Ananda Development PCL, Bangkok’s number one mass transit condominium developer, is redefining urban living in Bangkok by building world-class properties in close proximity to Bangkok’s mass transit stations. The company now has a portfolio 60 residential projects in Bangkok, which are on average just 76 metres from the nearest mass transport station. These provide local residents, expats and overseas buyers with a choice of 44,200 contemporary, state-of-the-art condo units in all corners of the city, from prime downtown districts to exciting up-and-coming suburbs.

With five distinct condo brands – ASHTON, IDEO Q, IDEO Mobi, IDEO and ELIO – Ananda’s projects promise “Urban Living Solutions” to young professionals who value convenience and connectivity above all else. The company now plans to launch 10 new projects worth THB38 billion, focusing on mass transit stations. Ananda ranked number one in terms of units sold within 300 metres of Bangkok’s mass transit stations in the 2016-2018 period. The company also topped the rankings for units sold overall in Bangkok in 2018.

The company is also generating additional revenue channels by expanding the business into other areas, including serviced apartments. Ananda now partners with The Ascott Limited, the world’s number one luxury serviced residence provider, and is in the process of developing five serviced apartment projects, namely Somerset Rama 9, Ascott Embassy Sathorn, Ascott Thonglor, LYF Sukhumvit 8 and the latest project at Central Pattaya Beach.

Bangkok’s urban transit network is crucial for the city’s estimated 8.3 million residents and hundreds of thousands of tourists with urban transport networks now catering to more than 800,000 passengers per day*, with 126km of track and 90 stations. A further 340km of track and 196 stations are in the pipeline, taking the total length of Bangkok’s mass transit systems to 466km with a grand total of 286 stations by 2030. This will it make it longer than the London Underground or New York Subway.

In 2018 alone, Ananda’s transfers increased 120% year-on-year to THB33 billion – an all-time high. In addition, the company reported record international transfers of THB6.3 billion, an increase of 300% over 2017, and international annual sales of THB10.1 billion, another record total. It also has a large backlog of THB41 billion due to transfer over the next three years.

Ananda and its partner Mitsui Fudosan launched five new condo projects in 2018, including IDEO Sathorn-Wongwian Yai, IDEO Ratchada-Sutthisan, ELIO Sathorn-Wutthakat, and a development at Saphan Khwai. In addition, the two companies entered into their first four serviced apartment projects, valued at THB10 billion. The companies now have 30 projects worth THB128 billion – the largest number of joint venture developments in Thailand. This is expected to grow further to THB157.6 billion in 2019. With strong cash flow of over THB 13 billion which can be used to invest and strengthen the business in future.

“In recent years, Bangkok has been transformed from a captivating but congested Asian city into a smart, forward-thinking global metropolis. Connectivity is at the heart of this regeneration, allowing residents and visitors to travel around this exciting city quickly and easily. At Ananda Development, we understand the impact that accessibility can have on people’s lives – especially younger citizens who lead active, urban lifestyles. Our diverse collection of condo projects, inter-linked with Bangkok’s transport network, is making this dream of modern city life a reality for thousands of people,” said Chanond Ruangkritya, CEO of Ananda Development.

Bangkok has always been a highly appealing destination for leisure travellers and expats, due to its vibrant street life, friendly ambience and plethora of attractions. This is evidenced by the fact that Thailand’s capital is now the world’s most-visited city**, attracting more than 20 million international visitors per year, the majority of whom enter through the city’s two international airports.

The city’s appeal among investors was always tainted however, by the notorious traffic congestion, which made travelling around Bangkok a slow and difficult process. With the expansion of the city’s urban rail network, including airport rail links to Suvarnabhumi and Don Mueang, Bangkok is now becoming even more liveable and lovable, raising its profile among Thai and international urbanites.

In the years ahead, Ananda’s strategy of developing high-quality residences close to mass transit stations means that more people than ever before will have the opportunity to live, work and play in this vibrant Asian metropolis.

Book your hotel in Bangkok, Thailand and around the world in 95 countries at best rates available. Pay at the hotel and earn HolidayClicks Points. Book now at HotelWorlds.com!