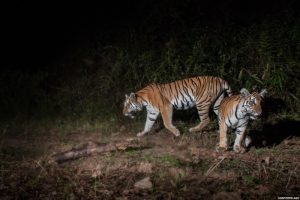 Bangkok (Thailand) – March 29, 2017 (travelindex.com) – In a welcome sign of hope for the endangered tiger, a new scientific survey has confirmed the presence of the world’s second breeding population of Indochinese tigers and provided the first photographic evidence of tiger cubs in eastern Thailand. Announced at a press conference today, Thailand’s Department of National Parks, Wildlife and Plant Conservation (DNP), Freeland, a frontline counter-trafficking organization, and Panthera, the global wild cat conservation organization, hailed the finding as a critically-timed victory for the future of the Indochinese tiger, confirming the first evidence of a breeding population in Eastern Thailand in over 15 years. Conducted in partnership by Freeland and Panthera with support from the government of Thailand, the camera trap survey carried out in the forest complex in Eastern Thailand indicated a density of 0.63 tigers per 100km2.

While these data suggest the region supports an exceptionally modest tiger density, on par with some of the most threatened tiger habitats in the world, the results conversely demonstrate the species’ remarkable resilience given wildlife poaching and illegal rosewood logging present in the complex – a UNESCO World Heritage Site.

Breeding of tigers represents a key milestone for this UNESCO World Heritage Site. These and other results have inspired optimism that efforts to train and equip protected area rangers are paying off. The Director of the National Parks Division of the DNP, Dr. Songtam Suksawang, said, “The stepping up of anti-poaching patrols and law enforcement efforts in this area have played a pivotal role in conserving the tiger population by ensuring a safe environment for them to breed. However, we must remainvigilant and continue these efforts, because well-armed poachers still pose a major threat.”

Subject to such extreme levels of poaching, tigers are only believed to have survived in the area due to an early recognition of the significance of this Eastern Thailand forest complex for the species’ future in Thailand, and a strict, long-term investment in well-implemented, counter-poaching law enforcement efforts from the national government. These efforts have been supported by conservation organizations like Freeland and Panthera.

For more than a decade, the DNP and Freeland have surveyed tigers in Eastern Thailand and trained rangers tasked with their protection after others gave up on the idea that the area had any tigers. Freeland’s Chairman of the Board, Kraisak Choonhavan, said, “The existence of tigers here was often doubted, but these recent surveys are proving its importance not only nationally but regionally and internationally as well. It’s crucial to continue the great progress made by the Thai government to bolster protection for tigers at the frontlines.”

He added, “As long as the illegal trade in tigers continues, they will need protection. Counter-wildlife trafficking starts at the source. Here is a modern project that has helped to bring rangers and police together that should be replicated across all other tiger range countries, so these populations can recover.”

Panthera Senior Tiger Program Director, Dr. John Goodrich, explained, “The extraordinary rebound of eastern Thailand’s tigers is nothing short of miraculous, and a true testament to the DNP’s commitment to saving its most precious natural resource.”

Goodrich continued, “Even more invigorating, Thailand’s World Heritage Forest Complex is home to prime forested habitat that, with significant conservation resources, could support eight times as many tigers as it does now. With continued infiltration of rigorous anti-poaching protection, there is no doubt that this population can be fully recovered, burgeoning into a tiger stronghold and serving as a source of life and diversity for depleted tiger populations in Cambodia, Lao PDR and throughout the species’ range.”

Today, just 221 Indochinese tigers are estimated to remain in two Asian countries: Thailand and Myanmar. Thailand’s Huai Kha Khaeng Wildlife Sanctuary, the site where Panthera’s CEO Dr. Alan Rabinowitz worked on the big cats in the 1980’s, is home to the largest (35-38 individuals) and only other known breeding population of Indochinese tigers.

Once ranging across much of Asia, scientists now fear that tigers are all but extinct in southern China, Cambodia, Lao PDR, Vietnam and much of Myanmar. Poaching for the illegal wildlife trade stands as the gravest threat to the survival of the tiger, whose numbers in the wild have dwindled from 100,000 a century ago to 3,900 today.

About DNP
The Department of National Parks, Wildlife and Plant Conservation (DNP) was established in 2002, assuming management of the country’s national parks once managed by the Royal Forest Department. As an agency of the Ministry of Natural Resources and Environment, DNP also helps to protect the kingdom’s wildlife and rich ecology.

About Panthera
Panthera, founded in 2006, is devoted exclusively to preserving wild cats and their critical role in the world’s ecosystems. Panthera’s team of leading biologists, law enforcement experts and wild cat advocates develop innovative strategies based on the best available science to protect cheetahs, jaguars, leopards, lions, pumas, snow leopards and tigers and their vast landscapes. In 50 countries around the world, Panthera works with a wide variety of stakeholders to reduce or eliminate the most pressing threats to wild cats—securing their future, and ours. Visit panthera.org.

About Freeland
Freeland is a frontline counter-trafficking organization working for a world that is free of wildlife trafficking and human slavery. Our team of law enforcement, development and communications specialists work alongside partners in Asia, Africa and the Americas to build capacity, raise awareness, strengthen networks and promote good governance to protect critical ecosystems and vulnerable people. For more info, visit www.freeland.org or follow Freeland on Twitter @FREELANDpeople or www.facebook.com/freelandfoundation.