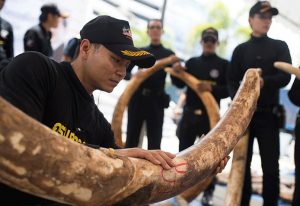 Nairobi (Kenya) – June 9, 2017 (travelindex.com) – In a landmark operation, a cross-border African task force has arrested 7 key players that smuggled 1 ton of elephant tusks from Uganda to Singapore via Kenya in one instance alone, and who are part of a syndicate responsible for the ongoing decimation of Africa’s elephants for the ivory trade, as well as other endangered species whose body parts are still being smuggled in large quantities to Asia’s black markets.

The Lusaka Agreement Task Force (LATF) announced today that they have just concluded coordinating an intensive six-week operation resulting in multiple arrests, including a senior Kenyan Customs official, several shipping agents, and high-level traffickers for their role in smuggling the illegal consignment to Singapore in March 2014. The accused are also under investigation for other wildlife crimes. The operation revealed evidence that link​s​ to other parts of Africa and Asia.

Investigators believe the covert pipeline used in the March 2014 case, and the people running it, have remained in operation until now, as thousands of tusks and other wildlife parts, have been smuggled through identical routes and mechanisms. During the operation, which focused on ivory trafficking, another wildlife trafficking kingpin who is on the Interpol wanted “Red Notice” list was discovered in the mix and turned in for prosecution in Tanzania for his role in trafficking the remains of thousands of endangered animals to Southeast Asia. The accused, Gakou Fodie, was successfully extradited from the Uganda/Kenya border to Tanzania earlier this week for prosecution in his role in the illegal export of 6 tons of pangolin scales to Asia. Fodie has also been linked to other East and West African wildlife exports to Asia.

Coordinated by LATF, the recent operation is the result of 18 months of investigation in 8 countries by numerous agencies. In December 2015, LATF traveled to Bangkok and exchanged information with the ASEAN Wildlife Enforcement Network (ASEAN-WEN) and its member agencies about multiple ivory seizures in Southeast Asia. That exchange was first put to use in an initial LATF-coordinated operation in West Africa in late 2016 that resulted in 8 arrests of Customs and shipping officials.

LATF then analyzed data from both the 2016 West African-focused operation and the March 2014 seizure in Singapore. Using a digital forensics unit called Cellebrite and a computer analysis program called i-2, investigators were able to connect the dots between the seizures and the suppliers. Acting on this analysis, LATF led a team of Kenyan Police, Wildlife, Ports Authority and Customs officers to uncover a wildlife trafficking pipeline operating out of Uganda, Kenya, and Tanzania. The team discovered and arrested a Kenya Revenue Authority officer, James Njagi who worked at the port of Mombasa, as well as James Oliech and Silas Ndolo Kimeu, both clearing agents in Mombasa. These men collaborated with a Kenyan national, Justus Wesonga, who coordinated and oversaw the illegal shipment of tusks from Uganda across the Malaba border post into Kenya. Fifteen crates of elephant tusks marked as coffee berries had been transported by road on a truck to Mombasa port where they were loaded onto a vessel bound for Singapore after clearance by the port and Customs officials. As LATF’s manhunt continued, Justus Wesonga and Jumba Gaylord were also rounded up. Gaylord appears to have played a major role in arranging the ivory to pass through Customs and port control checks.

In 2015 alone, 32 tons of ivory were seized in Southeast Asia coming from East and West African ports. “These arrests reveal how the smuggling has been orchestrated,” said Kraisak Choonhavan, Chairman of Freeland, the counter-trafficking organization that provided training for the LATF-coordinated operations. “We hope the investigation will now continue in Asia to find the big buyers who are sponsoring the killing of elephants. Africa is now ahead of Asia in going beyond seizures and making meaningful arrests of wildlife criminals,” he added. “But it is heartening that African law enforcement benefited greatly from Southeast Asian law enforcement cooperation in this big case.”

Sean O’Regan, Freeland’s Law Enforcement Manager for Africa, said. “The discovery of this underground pipeline that has been used to move significant volumes of tusks out of Africa to Asian black markets shows there is still hope for the very endangered elephant.”

Ebayi Bonaventure, Director of the LATF, vowed to continue the investigation. “We will carry on and find everyone involved in this criminal supply chain, from the poaching fields to the buyers. We will not stop until the killing and trafficking stops,” he said.

LATF coordinated the multi-agency African investigation team to travel to Southeast Asia twice in the past 18 months to meet Asian law enforcement officers and gather evidence to support the ivory trafficking cases. Members of the multi-agency investigation team have been undergoing specialized investigation training by Freeland. Freeland, in association with the LATF, Interpol, and United Nations Office on Drugs and Crime, have been bringing African and Asian law enforcers together to exchange information on wildlife trafficking cases like this one.

January-June 2016: Back in Africa, investigators undergo specialized training by Freeland to use their new information and analyze and disrupt complex supply chains.

July-September 2016 and January 2017: LATF coordinated joint transnational investigations with wildlife authorities, police and customs officials that lead to the arrests of 8 suspects, Congolese nationals in Kinshasa, Congo DR and Pointe Noire, Congo Brazzaville responsible for smuggling a total of 3.9 tons of elephant tusks to Thailand in 2015 and Vietnam in 2014.

Mutual Legal Assistance processes have been initiated between affected countries to facilitate collection of critical evidence from authorities in Thailand and Vietnam who made the seizures in support of prosecution.

October-December 2016: LATF and its member countries (including Kenya and Uganda) undergo further training by Freeland, analyzing recent investigation results and exploring next steps to break up remaining wildlife trafficking supply chains between East and West Africa.

April-May 2017: In Uganda and Kenya, LATF and its members identify and arrested 7 members of an illicit supply chain tied to the March 2014 Singapore ivory seizure and likely other shipments.

June 2017: 2 suspects including kingpin, Gakou Fodie netted at Malaba, Kenya by joint team coordinated by LATF. Gakou Fodie is extradited to Tanzania where he will stand trial.

All phones were seized and analyzed. All 3 suspects appeared in court at Shanzu, Mombasa on April 25, 2017. Cash bail of Ksh2Million each plus surety of the same.

On May 5, 2017 SIG arrested at Malaba, the Uganda and Kenya border crossing:

JUMBAH AMAHENO GAYLORD – facilitated and monitored the container from Malaba to Mombasa port. GAYLORD arranged the container to “pass through” the Kenya Customs scanning system up to loading on vessel destined to Singapore. Mobile phone seized and to be analyzed. Evidence shows he sent money 3 times in 1 week totaling over Ksh300000 to Gaylord. He was detained and taken Mombasa under police escort to be arraigned in court on May 8, 2017.

On May 27, 2017 at Malaba:
JUSTUS WESONGA who facilitated and arranged the ivory into containers at Kampala, Uganda, including its movement up to Malaba border, was arrested on May 27, 2017 at Malaba. Also arrested at Malaba on the same day was Justus Ogema Owade. Both suspects were transported to Mombasa where they were locked in police cells. After being interviewed, Ogema was released for lack of sufficient evidence after recording a statement, while Wesonga was taken to court on May 29, 2017. Owade will, however, be used as a prosecution witness.

About Freeland:
Freeland is a frontline counter-trafficking organization working for a world that is free of wildlife trafficking and human slavery. Our team of law enforcement, development and communications specialists work alongside partners in Asia, Africa and the Americas to protect the environment and vulnerable people from organized crime and corruption. For more info, visit www.freeland.org also; follow Freeland on twitter @FREELANDpeople or facebook.com/freelandfoundation

Lusaka Agreement Task Force is an African inter-governmental organization that facilitates cooperative activities in/among the Party states to the Lusaka Agreement, in carrying out investigations on violations of national laws pertaining to the illegal trade in wild fauna and flora. www.lusakaagreement.org