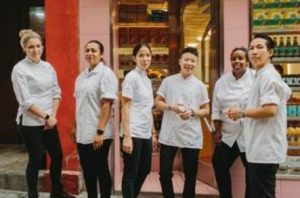 Hong Kong (Hong Kong SAR) – March 18, 2019 (travelindex.com) – While many observers bemoan the lack of female representation in the restaurant industry, one Hong Kong hospitality group is leading the charge and embracing the change. First and foremost, Black Sheep Restaurants is about the people in our team and the family we have created,” explains Syed Asim Hussain, co-founder of Black Sheep Restaurants. “If you look after your people, give them opportunities to grow and support them wherever possible, they will do the right thing for your guests.”

Discover the Top Restaurants for Fine Dining in Bangkok only at Top25Restaurants.com/Hong-Kong

Together with his partner, chef-trained Christopher Mark, the pair founded Black Sheep Restaurants with the intention of creating a dynamic community and telling compelling stories through food. “Community is our cornerstone and we are dedicated to ensuring our family flourishes. In less than seven years, we have grown our team to over 1,000 team members and half of them are women. While other restaurant groups struggle to achieve gender equality, or are reluctant to promote female chefs to senior positions, women are a driving creative force in our restaurants and leaders in their respective fields.”

Gisela Alesbrook
“My recipes have been passed down the generations from my mother and grandmothers.”
At the Wes Anderson-styled Hotal Colombo, Chef Gisela recreates the humble cuisine of her childhood in Sri Lanka, paying homage to her family’s treasured recipes and her native country’s vibrant street food culture. Of Dutch Burgher and Indian by heritage, Chef Gisela prides herself as being one of Black Sheep Restaurants’ very first hires.

Despite dabbling in a range of interests, from banking to lingerie design, Chef Gisela is happiest in the kitchen. In Hong Kong, she is excited to showcase her native culture and its underrepresented cuisine. Her dishes come with all the staple spices, colours and flavours you would expect in a local Sri Lankan eatery, presented with added finesse.

Lisette Magampon
“The most important class is technique. A great chef is first a great technician, and that only comes through endless repetition.”
Chef Lisette oversees Osteria Marzia, Black Sheep Restaurants’ coastal Italian restaurant. After a five-year stint at the renowned Gramercy Tavern in New York, Chef Lisette’s passion for Italian culinary began when she bought a one-way ticket to Italy determined to learn about its regional cuisines. After travelling the breadth of the country, she returned to New York to work as Sous Chef at Il Buco Alimentari e Vineria, a restaurant focused on the cuisine of Italy’s Umbria region.

One of the challenges of working in a male-dominated industry like F&B is that female chefs have to work twice as hard to prove themselves. She credits Philippe Bertineau, of Alain Ducasse’s acclaimed Midtown restaurant Benoit, and Jonathan Waxman, who pioneered Californian cuisine, for helping to shape her early career.

Discover the Top Restaurants for Fine Dining in Bangkok only at Top25Restaurants.com/Hong-Kong

Safia Osman
“For any skill, take your time to learn, study and stay in a place long enough to understand. To learn pastry, make it better and prettier than yesterday.”

As the pastry connoisseur who helms The Bakery, Black Sheep Restaurants’ central pastry kitchen, Chef Safia grew up with cereal and pie, the latter becoming a distinguishing part of her culinary repertoire.

Dedicated to creating sweet delicacies, she names honey as her go-to ingredient for its ability to bring classic sweetness to desserts and enhance savoury dishes with a layer of complexity. Born to Somali-American parents, she developed her sweet tooth from an early age. One of her earliest memories is discovering a local breakfast snack, Injera, comprising a layer of stacked sweet crepes with honey.

With over 20 years of experience, Chef Safia has worked alongside such celebrated pastry chefs as Claudia Fleming, winner of the coveted James Beard Award. After leaving the US, she worked in Dubai before arriving in Hong Kong in 2016.

Angie Ford
“Being able to be creative through food is extremely freeing.”
For Chef Angie, cooking presents endless learning opportunities. The Executive Chef of Buenos Aires Polo Club, Black Sheep Restaurants’ Argentinian steakhouse, Angie started her culinary career helping out in the family kitchen at the age of 11. She grew up learning the different roles in a restaurant, from serving and bartending to managing before finally beginning her apprenticeship when she was 18. She is continuing a family tradition as her three sisters are currently pastry chefs.

A vocal advocate of ethically-raised meat, her menus at Buenos Aires Polo Club demonstrate her expertise and ability to prepare various cuts of steak from one specifically-reared breed, the Aberdeen Black Angus. Chef Angie competed in Iron Chef Canada, which she recalls as “a super stressful hour but also extremely rewarding”. Her advice for surviving in the pressure-cooker world of restaurants: “Be a positive force in the kitchen, and do not lose your cool.”

Yen Chan
“Nobody is born as a chef, and it does not happen overnight. If you want to succeed, you need the right attitude.”
For La Vache Tsim Sha Tsui’s Yen Chan, her hobby became a passion and eventually her career. After studying Culinary Arts and Design in Canada, she worked front of house for five years before taking up the challenge to venture into the kitchen. Aside from overcoming a language barrier, she had to familiarise herself with the frantic pace of working in a large-scale line kitchen.

With the goal of one day opening her own restaurant, she was inspired by a visit to a fifth-generation sushi bar in Tokyo, where the resident chef produced a handmade piece of sushi every two seconds. “Watching that level of expertise is inspiring. It reminds you of the level of dedication required to hone your craft.”

Charrinn (Noom) Singdaechakarn
“Be a chef who never stops learning, and love what you do.”
Head Chef of Soul Food Thai, Chef Noom has been mastering the cuisine of her homeland since she was 24. While studying in Sydney, she took on a part-time job working in the kitchen of a Thai restaurant. Her passion for cooking began as a child. Living in a garden house, her mother would grow fresh ingredients to incorporate into their meals. Her appreciation for authentic ingredients extends to Soul Food Thai where everything is made from scratch. Originally from Issan, the Northeastern province of Thailand, her go-to dish is noodle soup. Although it looks deceptively simple, it requires lots of ingredients and patience to prepare and perfect.

For Chef Noom, the most challenging part of Thai cuisine is mastering the knife skills. Her mentor, Chef Chaiwat, helped develop these skills by having her “julienne the kaffir lime leaf into hair-like strands”.

Black Sheep Restaurants curates distinct dining experiences that tell a story about a particular time, place, culture or cuisine while celebrating the bounty of premium ingredients available both locally and from abroad. Always pushing boundaries, the group continues to expand rapidly within Hong Kong and beyond.