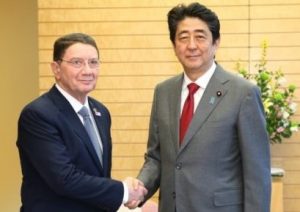 “Japan will continue to promote tourism and stress its great potential in people to people understanding as well as its important role in rural area development”, said Prime Minister Abe.

On the occasion, Mr. Rifai presented Prime Minister Abe with the Open Letter on Travel and Tourism, an initiative jointly led by UNWTO and the World Travel and Tourism Council (WTTC) to advocate tourism and its role to the development of nations.

Mr Rifai congratulated Prime Minister Abe on the impressive development of the tourism sector since he took office in 2013 and highlighted the potential that tourism has to bring development to all the areas of Japan. In 2016, Japan received 24 million international tourists, an increase of 22% as compared to 2015. Japan set as a target to increase the number of foreign tourists to 40 million by 2020, and to 60 million by 2030.

“Japan is showing a clear leadership in tourism development by placing tourism high in its socio-economic agenda. We thank Prime Minister Abe for its vision and leadership and look forward to continuing working with Japan to achieve its set target of 40 million international tourists by 2020”, said Mr Rifai.

David Scowsill, President & CEO, WTTC, said: “Japan is a country which has long recognized the power of our sector to drive economic growth. Travel & Tourism contributes 7.4% to the country’s GDP and generates over 4.5 million jobs, or 6.9% of total employment in the country. Japan ranks 4th in the world for Travel & Tourism GDP. We encourage the government to continue its great efforts to stimulate Japan’s Travel & Tourism sector, focusing on creating products to attract new markets and continuing to invest in infrastructure to absorb future demand in the country.”

Mr Rifai also met the Governor of Yamagata Prefecture, Mieko Yoshimura, to announce the forthcoming UNWTO Conference on Tourism and Snow-Related Activities, to be held in February 2018. The event is aimed at supporting the recovery of the Tohoku region (Northern) from the 2011 earthquake. It is also part of the efforts of UNWTO to support Japan in diversifying its tourism offer to less known tourism areas.

The visit was also an occasion to inaugurate the Tokyo Liaison Office of the UNWTO Regional Support Office for Asia and the Pacific(RSOAP)based in Nara in the presence of the 17 UNWTO Affiliate Members of Japan and 200 key tourism leaders and stakeholders. The office will provide supplementary support to the activities being carried out from the Nara-based office.

Besides his encounter with Prime Minister Abe, Mr Rifai held meetings with Mr. Yoshihiro Nikai, Secretary-General of Liberal Democratic Party (LDP), Mr. Keiichi Ishii, the Minister of Land, Infrastructure, Transport and Tourism (MLIT), Mr. Nobuo Kishi, State Minister for Foreign Affairs and Mr. Akihiko Tamura, Commissioner of Japan Tourism Agency (MLIT), all of whom expressed their support to the tourism sector and the work of UNWTO.

On the occasion, UNWTO Secretary-General also addressed the research commission for the establishment of a tourism oriented nation of the LDP and met with the representatives of the Japan National Tourism Organization (JNTO), the Japan Association of Travel Agents (JATA), the Japan Travel and Tourism Association (JTTA), JTB Corp., TOYO University, All Nippon Airways (ANA), Gurunavi Inc. and the Japan International Cooperation Agency (JICA).