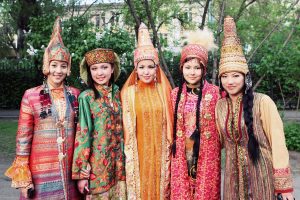 Astana (Kazakhstan) – November 6, 2018 (travelindex.com) – The Pacific Asia Travel Association (PATA) is set to organise PATA Travel Mart 2019 in Astana, Kazakhstan in September. The event will be hosted by the Ministry of Culture and Sports of the Republic of Kazakhstan and the Kazakh Tourism National Company JSC, the key organization in the tourism industry effectively promoting the tourist brand of Kazakhstan and contributing to attracting investments to the industry.

“We are excited to hold the first-ever PATA event in Central Asia in the Republic of Kazakhstan. As the destination stands at the crossroads between Asia and Europe, it is the perfect venue to organise the Association’s signature travel trade exhibition in a uniquely transformational city that blends various cultures and heritages of both the East and West,” said PATA CEO Dr. Mario Hardy. “We look forward to working with the host in showcasing this truly unique destination.”

Vice Minister of Culture And Sport of The Republic of Kazakhstan, Mr. Yerlan Kozhagapanov, said, “We are honoured to be the bid winner and are grateful for the opportunity to host PATA Travel Mart 2019. We are positioning Astana as a MICE hub for Central Asia and looking forward to welcoming PATA members, hosted buyers and visitors at PATA Travel Mart 2019.”

Kazakhstan is the heart of Eurasia. Located simultaneously in two parts of the world – Europe and Asia, it is at the junction of several of the world’s largest civilizations and borders with China, Kyrgyzstan, Turkmenistan, Uzbekistan, and the Russian Federation. Due to its key strategic location, it is among the strongest supporters of the Belt and Road Initiative strategy adopted by the Chinese government. According to the World Tourism Organization (UNWTO), the country received a total of over 7.7 million total visitors in 2017.

Kazakhstan has a unique geography with a rich and diverse landscape, which includes numerous lakes, lowlands, deserts and valleys framed by mountains in the east and southeast. Due to the large territory and variety of natural conditions, there are over 6,000 species of plants, 172 species of mammals, 500 species of birds, 52 species of reptiles, 12 species of amphibians, and 150 species of fish.

The country’s new capital, Astana, has become a showpiece for 21st-century Kazakhstan, with a fantastical skyline marked by landmark buildings designed by leading international architects in a variety of Asia, Western, Soviet and futuristic styles.

Astana, also known as the ‘Singapore of the steppe’, is a growing city with a young, forward-looking vibe, where Kazakhstan’s ambitious and talented youth are increasingly drawn. This ever-growing city – host to the Expo 2017 world fair – offers a glimpse into a town of tomorrow.

About PATA
Founded in 1951, PATA is a not-for-profit membership association that acts as a catalyst for the responsible development of travel and tourism to, from and within the Asia Pacific region. The Association provides aligned advocacy, insightful research and innovative events to its more than 800 member organisations, including 95 government, state and city tourism bodies, 20 international airlines and airports, 102 hospitality organisations and 70 educational institutions, as well as over a hundred young tourism professional (YTP) members across the world. The PATA network also embraces the grassroots activism the PATA Chapters and Student Chapters, who organise numerous travel industry training programmes and business development events across the world. Thousands of travel professionals belong to the 35 local PATA Chapters worldwide, while hundreds of students are members of the 21 PATA Student Chapters globally. Their local activities underpins PATA’s membership in Uniting Travel, a coalition of the world’s major Travel & Tourism organisations dedicated to ensuring that the sector speaks with one voice and acts in unison on the major issues and includes ACI, CLIA, IATA, ICAO, WEF, UNWTO and the WTTC. The PATAmPOWER platform delivers unrivalled data, forecasts and insights from the PATA Strategic Intelligence Centre to members’ desktops and mobile devices anywhere in the world. PATA’s Head Office has been in Bangkok since 1998. The Association also has official offices or representation in Beijing and London. Visit www.PATA.org.