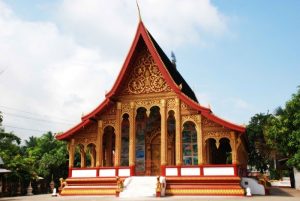 Luang Prabang (Laos) – June 7, 2017 (travelindex.com) – Mekong Tourism’s flagship event Mekong Tourism Forum takes place June 6-9, 2017 in the UNESCO World Heritage town of Luang Prabang in Laos. Hosted by the Lao Ministry of Information, Culture, and Tourism (MICT) in UNESCO World Heritage Town Luang Prabang, the three-decade old event is free of charge for all tourism professionals. After inspiring keynotes in the morning, MTF2017 features eight topical tracks with two sessions each in experiential venues all around Luang Prabang. On June 6, MTF2017 hosted the first MIST (Mekong Innovative Startup Tourism), in partnership between ADB and MTCO to support local travel and tourism startups. On the same day in the afternoon, half-day sessions educated travel and tourism operators how to engage with influential bloggers. MTF2017 is under the theme: Prosper with Purpose.

Luang Prabang is the historical capital of the ancient Laotian kingdom of Lane Xang (‘The Kingdom of a Million Elephants’) located along the old Silk Road. The name Luang Prabang comes from a celebrated Buddha image (Pha Bang), a present from the powerful Khmer monarchy. Luang means “Great” or “Royal”. The city first blossomed from the late 14th century to 1545, when Laotian King Phothisarat moved the capital of the Kingdom to Vientiane. However, Luang Prabang fame remained as a spiritual and education centre with its numerous temples. When the Lang Xang Kingdom finally collapsed at the end of the 17th century and split into three Laotian smaller kingdoms, Luang Prabang became the capital of the Northern regional entity, along with Vientiane (Central Laos) and Champassak (South Laos).

Luang Prabang Kingdom, fearing invasions from its Burmese neighbours, resolved to ask protection from Siam in 1752, becoming finally a vassal state in 1778. The city remained the residence of local kings and an important spiritual centre. Following the sack of the city in 1887 by Haw Chinese bandits (also named ‘Black Flags’), the Lao Monarchy asked the French for protection. French were already present in Cochinchina and Annam (Vietnam) at that time.

A French Commissariat was established and in 1893, the French-Siamese treaty transferred Laos to the French administration. While the capital of the newly French Protectorate was confirmed in Vientiane, Luang Prabang retained its role as a royal residence. From 1893, the city urban image changed with new administrative buildings and villas being built, mostly in the historical centre, nestled on a peninsula surrounded by the Mekong River. The city received its current shape under King Sisavang Vong in the first half of the 20th century.

Luang Prabang is consequently an outstanding example of the fusion between traditional architecture and Lao urban structures with the planning of European colonial authorities in the 19th and 20th centuries. Its unique, remarkably well-preserved townscape illustrates a key stage in the blending of these two distinct cultural traditions. This unique heritage was the main asset in UNESCO decision to inscribe Luang Prabang into the prestigious World Heritage List in 1995.

Geography and Demographics
Luang Prabang is located in northern Laos at the heart of a mountainous region. The town is built on a peninsula formed by the Mekong and the Nam Khan River. Mountains (in particular PhouThao and PhouNang mountains) encircle the city in lush greenery.

The city remains relatively small – less than 25,000 inhabitants in its historical boundaries, 50,000 in its “metropolitan” area. Luang Prabang Province has a total population of 400,000 inhabitants.

The traditional urban fabric of the old villages, each with its temple, was preserved by later constructions. The colonial urban morphology, including the network of streets, overlapped harmoniously with the previous model. Formerly the town limits were defined by defensive walls.

The richness of Luang Prabang architecture reflects the mix of styles and materials. The majority of the buildings are, following tradition, wooden structures. Only the temples are in stone, whereas one- or two-storey brick houses characterize the colonial element of the town. The many pagodas or “Wat” are among the most sophisticated Buddhist temples in Southeast Asia and are richly decorated (sculptures, engravings, paintings, gilding and furniture pieces). Wat Xieng Thong, which dates from the 16th century, comprises an ensemble of the most complex structures of all the pagodas of the town.

Many traditional Lao houses remain; they are built of wood using traditional techniques and materials introduced in the colonial period, such as plaited bamboo panels coated with wattle and daub. Brick colonial buildings, often with balconies and other decorative features in wood, line the main street and the Mekong.

As a result of heritage regulation, no monuments can be destroyed, moved or modified externally or internally. Restoration must adhere to original architectural specifications such as facades, roofs, materials or colours. Advices and assistance for the renovation of existing historical structures can be found at the Maison du Patrimoine- Luang Prabang Heritage House, formerly the Customs House during the French Protectorate. Natural environment

The built heritage of Luang Prabang is in perfect harmony in the natural environment. The sacred Mount Phousi stands at the heart of the historic town built on a peninsula delimited by the Mekong and the Nam Khan, domain of the mythical naga. Ceremonies to appease the nagas and other evil spirits, and Buddhist religious practices (Prabang procession, the monks’ morning quest) perpetuate the sanctity of the place. Natural spaces located in the heart of the city and along the riverbanks, and wetlands (a complex network of ponds used for fish farming and vegetable growing) complement this preserved natural environment.

National Museum
The Royal Palace (today National Museum) is a typical example of the blend between Lao and European architecture. The Palace was built in 1904 for King Sisavang Vong and his family. It remained the official residence of the Royal Family until 1975, when the country became officially Lao People’s Democratic Republic, the palace being then converted into a museum. It shows the daily life of the Royal Family and has a fine collection of antiques. Not to be missed are temples inside the National Museum. A must- see, is Wat Ho Pha Bang which houses the Pha Bang famed Buddha. No photography is permitted inside the museum.

Wat Xieng Thong
Luang Prabang most iconic monastery and temple is well known for its roofs sweep low to the ground and its stunning ‘tree of life’ mosaic set on its west exterior wall. Close by are several stupas and three compact little chapel halls. The Red Chapel contains a rare reclining Buddha.