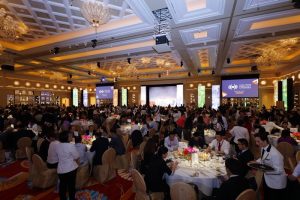 Macao (Macao SAR) – October 17, 2017 (travelindex.com) – With the sixth edition of the Global Tourism Economy Forum (GTEF) a welcome dinner was hosted for local and international guests by the Macao Special Administrative Region Government at Wynn Palace tonight, conveying the wish that the Forum will mark an unparalleled success and create a wealth of opportunities for global tourism cooperation.

In her welcome speech, Director of Macao Government Tourism Office (MGTO) and Vice Chairman of GTEF, Maria Helena de Senna Fernandes remarked, “As a tourist destination, Macao has woven a string of magnificent events to come. Just about a month ago, we staged the PATA Travel Mart 2017 and the PATA Board Meeting, both deemed a great success. Stepping into October, the Macao International Music Festival is now presenting a symphony of performances which tug at the heartstrings, and today, we have unveiled the Global Tourism Economy Forum, the spectacular annual gathering for pioneers of the global tourism industry. In a couple of days, the Macao International Trade and Investment Fair will be launched, not to mention the Macau Grand Prix and the Macao International Marathon that will liven up our city in the next two months. From the field of tourism, culture to sports, all of these spectacular events not only immerse locals and travelers into a world of profound experiences, but also bring industry stakeholders to a threshold of fruitful collaboration.” She added that MGTO will carry on close and effective teamwork with tourism industry partners to transform Macao into a world-class leisure travel destination.

At the dinner, souvenirs were presented to representatives of the 16 Central and Eastern European Countries as the Partner Region, Guizhou Province as the Partner Province, and GTEF’s collaborative partner, supporting units, partners and sponsors as tokens of appreciation for their support. International and local guests also took the opportunity to connect with each other during the dinner.

As an international tourism platform designed to promote sustainable development of the global tourism industry with a focus on China, GTEF supports China’s Belt and Road Initiative and embraces the “16+1” economic framework between China and the 16 Central and Eastern European Countries in its sixth edition under the theme of “Regional Collaboration towards a Better Future”. GTEF 2017 gathers ministerial officials, leaders of globally‐renowned corporations, experts and scholars from around the world to explore how tourism collaboration characterized by shared interests and mutual respect is conducive to the building of a better future among nations and regions, with the aspiration to create opportunities and synergies. With a diverse and thought-provoking program, the Forum will continue tomorrow (17 October) with six themed panel discussions, various sessions and networking activities, offering business networking and matching opportunities for delegates from China and across the world.

For more information about the Forum, please visit www.gte-forum.com.