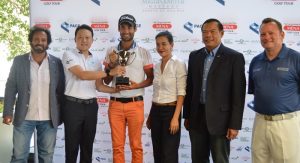 Dubai (United Arab Emirates) – March 30, 2017 (travelindex.com) – The 2017 MENA Tour champion will be invited to compete in 2018’s Dean & DeLuca Invitational, a celebrated PGA Tour event that enjoys rich tradition and history dating back to 1946 when the great Ben Hogan won the inaugural edition.

Held at Colonial Country Club in Fort Worth in Texas, with a $6.9 million purse the Dean & DeLuca Invitational is the longest running PGA Tour event at the same venue and the 10th oldest event on the PGA Tour – and one that enjoys a unique connection to some of the game’s greatest names including the great Ben Hogan.

Golf legends such as Sam Snead, Jack Nicklaus, Arnold Palmer and Adam Scott have all donned the plaid jacket, the ubiquitous symbol of supremacy at the Colonial, but the legacy of Hogan still looms large over his native Fort Worth, the scene of five of his tour victories.

A special invitation to the leading 2017 MENA Tour professional on the Order of Merit, courtesy of the close ties between Dean & DeLuca and Thailand’s MahaSamutr Coun-try Club. This partnership in conjunction with Colonial Country Club marks another ground-breaking step forward for the MENA Tour as it aims to form new alliances around the world that can benefit its members and grow the game of golf.

“PACE Development Corporation is delighted to be sponsoring MENA Tour for the second consecutive year and opening the tournament with MahaSamutr Masters 2017. We are also excited to offer this year’s tour winner an invitation to the Dean & DeLuca Invitational in 2018 to support the tour’s long term commitment to bringing the popularity of this game to Asia and being the first step before taking on the world stage. Good luck to all of this year’s players!” said Sorapoj Techakraisri, CEO, Pace Development Corporation Plc.

The global leader in fine foods Dean & DeLuca was recently acquired by Pace Development Corporation, one of Thailand’s leading real estate firms that owns MahaSamutr Country Club, and made foray into golf sponsorship when it sponsored the 2016 inaugural MahaSamutr Masters at Banyan Golf Club in Hua Hin.

“It feels great to see well-recognized global brands offer their support to the tour which sends positive signals to the golfing community about the tour’s commitment to supporting the careers of its members,” said Mohamed Juma Buamaim, chairman of the MENA Tour.

“The invitation to play in one of the most prestigious PGA Tour events is a great development for the MENA Tour, one that will resonate on many levels, reinforcing the growing strength of the game in the MENA region,” he said.

“I would like to thank Dean & DeLuca and MahaSamutr Country Club for their gesture and believe it will further motivate tour members to keep pushing forward. All we want is to fuel an ideal climate for competitive golf in the region for young golfers to come through the ranks and make a name for themselves,” he said, adding: “Every step is a leap forward.”

The invitation follows PACE Development’s sponsorship commitment of the MahaSam-utr Masters, part of a three-event Thailand swing that kicks off at Banyan Golf Club on May 1, followed by the Mountain Creek Open by Golf Citizen and the Pattana Golf Championship the following weeks.

A spot in the Dean & DeLuca Invitational is the latest addition to a raft of incentives of-fered on tour that includes multiple European Tour starts in addition to playing privileges on the Sunshine Tour and exemptions into the Final Stage of the Asian Tour Q-School for the leading professionals.

About MENA Tour:
An initiative of the Shaikh Maktoum Golf Foundation, the MENA Golf Tour was created in 2011 with the aim of developing golf in the region. It is affiliated to The R&A, the worldwide golf governing body based in the home of golf, St. Andrews, and the Arab Golf Federation and enjoys the Official World Golf Rank-ing (OWGR) status.

About PACE:
PACE is Thailand’s leader in luxury development and hospitality. Providing a full range of lifestyle proper-ties and services, PACE meets the needs of today and tomorrow using world-class design, introducing new trends to improve the urban landscape and enhance people’s lives. The firm also delivers innovation in the retail market with a strategy to build a portfolio of global food & beverage brands, including owner-ship of global brand Dean & DeLuca. PACE has gained recognition for premium quality and reliability, with award-winning developments as well as operations in some of the world’s most sought after locations.

About Dean & DeLuca:
Founded in 1977 by Joel Dean and Giorgio DeLuca with the opening of its flagship store in SoHo, New York, Dean & DeLuca has grown into a multi-channel retailer of gourmet foods, wines and kitchenware with operations throughout the United States including Charlotte, Kansas City, Georgetown, and St. Helena and international licenses abroad.