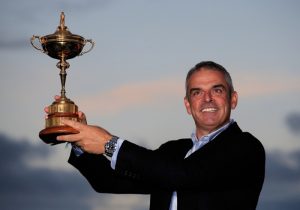 The Irishman, who played in three consecutive victories for Europe and famously led the side to glory in 2014, will captain a Professional Golfers’ Team against a Celebrity Team in an exciting change of format for the second Abu Dhabi Invitational event, which has established itself as a world-class competition where pro golfers, the GCC’s leading amateurs, sporting celebrities, leading business executives and entrepreneurs come together to play tournament golf and raise funds for charity. The 2017 edition will comprise an Amateur Championship on Saturday 28 January with invited sponsor and stakeholder guests before the main Invitational on Sunday 29 January. Both days are open to the public.

The Invitational will see a Professional Golfers’ team, captained by McGinley, play a Celebrity Team. Each professional and each celebrity will be paired with a VIP guest and the teams will compete against each other in a Ryder Cup Fourball format. The teams will be playing to raise money for the captains’ charities, with McGinley’s team playing for The McGinley Foundation. The Celebrity Captain and their charity will be revealed in January 2017.

McGinley said: “I am honoured to be captaining the Golfers’ Team at this year’s Abu Dhabi Invitational. I have enjoyed playing Yas Links on many occasions and look forward to being there again in January for what promises to be another wonderful occasion. I hope we can raise a lot of money for charity over the weekend as well as having a huge amount of fun.”

His Excellency Aref Hamad Al Awani, General Secretary of the Abu Dhabi Sports Council (ADSC), said: “We are thrilled Paul will be at Yas Links for the Abu Dhabi Invitational this year. He is a great character in the game and renowned for his unwavering commitment to charitable fundraising – an important feature for our event. We look forward to announcing many more big-name competitors from the worlds of golf, sport, entertainment and business in the coming weeks.

“We’re back at Yas Links because it’s the best links course in the region and one of the best golf venues in the world,” added Al Awani. “With its location on Yas Island, the region’s ultimate leisure destination, Yas Links truly deserves its world class status and, with support from our partners at Miral, it is a major part of Abu Dhabi Sports Council initiatives moving forward.”

The 2017 Abu Dhabi Invitational will also welcome a host of leading media from the world of television, print, digital, social and radio platforms. Interested media are urged to make contact with the event organisers as soon as possible.

Howie Roberts, General Manager of Yas Links, said he was thrilled to see the Invitational return. “We have hosted the Abu Dhabi Invitational for the past three years and are thrilled to see it here again for a fourth,” he said. “It is a chance to showcase this fantastic golf course, alongside Yas Island’s global entertainment and hospitality facilities, to an international and influential audience. The Abu Dhabi Invitational is always a wonderful event and we are proud to be associated with it.”

The Abu Dhabi Invitational is free to attend for spectators. Doors open at 7am on 28th January.

ADSC is aligned to the emirate’s leadership vision to develop sport and youth activities. The Council promotes an effective, emirate-wide sports calendar that stimulates the desire to participate in quality sports among all Abu Dhabi residents and helps the talented and motivated reach their sporting potential.

We at ADSC firmly believe that sporting events deliver a host of benefits for the emirate and its residents. These span improved health and wellness, the building of community spirit, the discovering of local talent and the delivery of international exposure of the emirate as a world-class sporting events hub.

About Yas Island
Yas Island, the region’s ultimate leisure destination is a playground for fun, adventure, entertainment and thrill-seeking action!