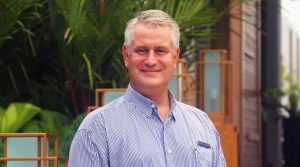 Swiss born raised in a family of hoteliers, Richard Mehr perpetuated the family tradition in South East Asia. He is no stranger to Hua Hin as he opened and managed two properties between the years 2006 to 2013, Putahracsa Resort and Banyan Resort & Golf. He was also the President of the Hua Hin & Cha-Am Skal Club from 2010 to 2013 and the Bailli of the Andaman Wine Club.

Previous to his appointment, he was the General Manager of the high-end renowned luxurious property, Samujana – Koh Samui.

Mehr brings along 28 years’ experience in managing hotels and resorts, golf resorts, wellness and high-end luxury properties, including 4 years as Director of sales for a multi-million US company based in Asia and in Europe and was Group Director of Operations for the well-known chain of exclusive properties, Fusion Resorts & Suites in Vietnam.

With a proven track record in senior management, Richard Mehr is a hands on professional with a keen eye for details and a passion for creating memorable guest experiences meeting the highest international standards across a range of segments.

About Radisson Blu Resort Hua Hin
Radisson Blu Resort Hua Hin is the first Carlson Rezidor property in Hua Hin, the world-famous seaside resort town in the west of Thailand. For centuries, Hua Hin has been known as the summer resorts destination for the Thai Royalty and aristocrats. The area is also home to some of the country’s best golf courses, often used for international championships. Business and leisure travelers visiting Resort Hua Hin can experience world renowned Radisson Blu’s first class accommodation and guest facilities, complemented with its international service philosophy of Yes I Can!SM and 100% Guest Satisfaction Guarantee.