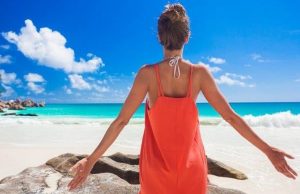 Mahe, Victoria (Seychelles) – December 3, 2018 (travelindex.com) – Seychelles makes the Official list of lowest security risk countries falling 9th in the World. The safest countries are listed in that order: Luxembourg, Switzerland, Slovenia, Norway, Denmark, Finland, Greenland, Iceland, Seychelles and Cape Verde. This is good news for us as Seychellois and for our tourism industry where Security and Safety are listed as key USPs of the islands. But the challenge is remaining in that list which is why it is more important today than it has ever been for Seychelles to maintain its foreign policy of ‘Friends of All and Enemy of None’ and not to be inviting world super powers to bring their rivalry on the doorstep of our islands.

As the Sustainable Blue Economy Conference in Nairobi was closing, news broke in Seychelles that discussions were taking place for a new tourism tax to sustain the local Blue Economy machinery. The tourism trade were surprised and shocked and called to try and find clarity. Tourism will always try to pass on all its lumbered with, as taxes and fees. The question remains, how far can Seychelles push their luck before a backlash is felt, when Seychelles prices itself out of the market for tourists using the ‘home grown’ establishments? The small hotels are the ones who are caught with increases in taxes and fees that they cannot pass on, and end up having to absorb them.

The Commonwealth has added a new Action Group to its Blue Charter. It will address Marine Protected Areas and will be championed by Seychelles, as the islands are deciding on its Assumption Island Military Base, or Coast Guard partnership with India.

Seychelles will protect 30% of its 1.4-million-square-kilometre exclusive economic zone by 2020, tripling the SDG14 and CBD Aichi targets for MPAs. The 411,000 sq km of Indian Ocean will be protected under a US$21-million debt swap for ocean conservation and ecosystem-based adaptation to climate change. The local Seychellois Blue Economy experts and technicians will need to have the country’s political will to live by words of protection, and safeguarding for future generations, as good custodians.

The Commonwealth’s Blue Charter remains an initiative to protect the oceans, seas and lakes. Nine member countries known as Action Groups will lead on different areas of oceans and its governance. Seychelles will need to walk the talk as the eyes of the world will be on its actions. Protect, must mean protect, and not playing nuclear submarines that is part of the creation of a superpower military base.

It was just a couple of years ago that the Seychelles News Agency reported “A creature of mystery – rare dugong is sighted in Seychelles at Aldabra”. Today, a boat has confirmed a Dugong was sighted at African Banks. This is good news and reason enough to intensify protection efforts.

Only last week, we wrote about a Whale Shark cruising close to La Digue Island, showing the works and policies of the past are paying off. Let us stay the course and stand firm in saving Seychelles’ fragile ecosystem from super power rivalry.

The festive season in on our doorstep and the hospitality trade is pulling its hair out, citing shortages in staff. The category of hotels least affected by serious workforce issues are the smaller ‘owner manager’ establishments, but they will also be first to fall prey to continued cost increases by the country. The five start establishments and other high end resorts need staff and good staff, to meet the challenges of hosting the more affluent tourists, who expect value for money. Three months to have approval for Gainful Occupation Permit (GOP) for foreign employees is leaving Seychelles with employers receiving their second and third choices, as the good ones will not be waiting for this length of time for Seychelles Authorities to go through their bureaucratic procedures. The high yield clients have expectations and one key expectation is service; this can only be provided by good and trained staff. Tourism remains the pillar of the island’s economy and if trained staff are required, it should be prioritised.

The new Seychelles National Museum of History is in the centre of Victoria in an impressive building that was constructed inn 1885 by the ‘Banque Orientale’. This was the first modern building of the Seychelles which was at that time being administered as part of Mauritius. In 1892 the Bank closed its doors and the land on which stood the city centre building reverted back to the Government and they also bought the building for Rupees 30. The building then became the Supreme Court and the island’s Treasury. The Supreme Court remained in this building until 2013.

In 1984 the building was declared a National Monument.