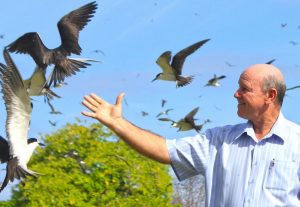 Victoria, Mahe (Seychelles) – June 12, 2019 (travelindex.com) – Last week’s editorial on opening opportunities for Islander Seychellois by ensuring they get access to financing or commercial loans brought the largest number of feedback ever since the three years the Saint Ange Tourism Report has been published. The subject obviously touched so many who cannot understand the inability for Seychelles to look at the Seychellois, and of the need to open doors for them. Some of the comments went as far as saying why had Seychelles forgotten the Islanders and left them behind. On a positive side someone from Praslin communicated that at least a bank is now taking the trouble to visit applicants, even for small loans, in order to better understand the need for the loan and to better appreciate the project.

Annual Birds Egg Season has arrived
The delicacy enjoyed by Seychellois once a year has started to arrive in Mahe. It is expected that the Guy Savy and his Family, the owners of Bird Island will once again ensure that the much awaited treat is appreciated once again by as many Seychellois as possible. Bird Island continues to be managed on a tight ‘environmentally friendly’ approach and at the same time the owners of the island remain conscious about Seychellois enjoying their tradition as they also ensure the continued annual landings by these magnificent birds.

African Resilience Summit
The coming African Resilience Summit that will be held this coming July in Johannesburg will see Naledi Khabo, CEO, ATA (Africa Tourism Association) , Daniela Wagner, Group Business Development Director of Jacobs Media Group rally a number of Tourism Ministers and Industry Leaders in Constitution Hill for a needed summit for preparedness in a bid to ensure the continent’s tourism industry is consolidated.

I will be present as the Head of the Saint Ange Tourism Consultancy and the former Tourism Minister of Seychelles who sits today as the President of the African Tourism Board.
It is expected that H.E. Edgar Chagwa Lungu, President of the Republic of Zambia and the Chairperson of SADC Organ on Politics, Defence and Security Cooperation will deliver the Keynote Address and speak about the regional African frameworks established. The SADC initiatives and how tourism fits into government planning. What challenges are faced and what opportunities have been identified

Dr. Taleb Rifai appointed Chairman of PATWA
PATWA, the Pacific Area Travel Writers Association has confirmed that Dr. Taleb Rifai, former Secretary General of the UNWTO (United Nations World Tourism Organisation) has been appointed as Chairman of its Advisory Council. The importance of this announcement for the world of tourism is to see expertise and experienced leadership being called upon for the continued development of the industry that has become so vital for the economic wellbeing of the world at large. Dr Taleb Rifai is well remembered for his years of successful service as the head of the UNWTO. He remains a sought-after speaker and panellist at tourism conferences. Congratulations to PATWA for this appointment.

A national preparatory committee chaired by Seychelles Tourism Board Chief Executive, Sherin Francis was thereafter set-up to spearhead the planning and organisation of the events.

The committee, which consists of the eight other members namely Jeannine Chung Faye, Emanuel D’Offay, Sybille Cardon, Oliver Bastienne, Tony Mathiot, David Andre, Cindy Vidot and Alvin Laurence, has been meeting on a regular basis to present an extensive one-year plan to commemorate this important milestone in the history of Seychelles.

Following the endorsement by cabinet on May 30, 2019 of the proposed plan to celebrate 250th anniversary of the first settlement in 2020, the 250 years national preparatory committee organised a press meeting to address the Seychelles press partners for the first time and unveil the logo of this historic event.

During the press conference held at the National History museum in the Settlement section on Friday June 7, 2019, that the committee also presented a brief overview of the calendar of activities over the 1-year celebration period, during which all Seychellois will be taken back through a historical journey of discovery about the Seychelles.

A series of planned activities for the 2020 celebrations will be launched on August 27, 2019; the activities scheduled will involve various events in districts and at national level.

“The celebration is not merely commemorating the anniversary of the first settlement, but it is also celebrating the birth of Seychelles – 250 years of Seychelles. As proud Seychellois, it is our duty to make sure that we celebrate this achievement as it should be,” said Mrs. Francis.

The committee chairperson also stated that a secretariat office will be set-up and that will be based at the Seychelles Tourism Board Headquarters in Mont- Fleuri, she encourages all Seychellois who would want to contribute their valuable ideas or make a contribution of their time towards the project to contact the secretariat.

Mrs. Francis also mentioned that throughout celebration period, the Seychelles tourism marketing strategy would carry the 250th anniversary brand to entice visitors to also take part in these historical events.

Yellow bi-plane of “Out of Africa” is back in Kenya
Oscar-winning movie ‘Out of Africa’ conjures images of the quintessential African setting: breathtaking savannah plains, bountiful wildlife and snapshots of Kenya’s rich tribal cultures. At the center of all of this, one remembers a yellow biplane which soared above Kenya’s dramatic landscapes, rousing flamingoes and becoming one of the most recognized features of Denys Finch Hatton (Robert Redford) and Karen Blixen (Meryl Streep)’s passionate romance, a performance that captured viewers’ imaginations all over the world.

In 2013, G-AAMY was sold at a Paris auction to Jochen Zeitz, the owner of Segera and Founder of the Zeitz Foundation, who had dreamed it should return home to Africa. Fitted with a new engine and delicately re-assembled at Segera, G-AAMY was given a new lease of life and once again soars over Kenya’s scenic landscapes.