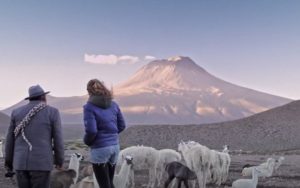 Saint Petersburg (Russia) – September 17, 2019 (travelindex.com) – Running right through the 23rd General Assembly in St Petersburg has been the topic of film and tourism. At the start of the Assembly, Spanish entrepreneur and President of Atlético de Madrid football cub Enrique Cerezo joined fellow experts to discuss the film industry’s close links with tourism and its shared values and benefits, including bringing people together and creating jobs and opportunities for all. Building on this, UNWTO Secretary-General Zurab Pololikashvili will take part in Cineposium, a leading international event around the world of cinema and visual production taking place back to back to the General Assembly.

Celebrating the role of film in promoting destinations and sustainable tourism, the General Assembly also saw the awarding of the first prize for “Exceptional Stories of Sustainable Tourism” during the Video Competition of the General Assembly. Chile won the new award, with the jury of leading journalists and media professionals applauding their clear demonstration of how tourism can help preserve traditional ways of life. Awards for Outstanding Country Promotional Videos were presented to: Tunisia, Mexico, India, Greece and Portugal, and Egypt. ​